Season 18 of ‘The Voice’ ran from February 24 to May 19, 2020, on NBC. The Voice is a reality television series where people showcase their beautiful vocals. The coaches this season were Blake Shelton, Kelly Clarkson, and John Legend. Nick Jonas was also a part of the panel. Moreover, Carson Daly also returned to this season being a host. The winner of the show was Todd Tilghman from Blake Shelton’s team. The team sizes were reduced to 10. There were five artists to compete in the finale.
In October 2019, Nick Jonas joined the show as a coach by replacing Gwen Stefani. Gwen left the panel to complete her shoot.

Artists who have also appeared in other shows 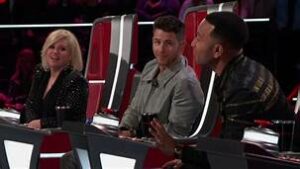 More about the show

The ratings for the show were good, and it was enjoyed by audiences all over the World. There were five episodes of the auditions in which the chair turns for those candidates who the judges love. After the completion of those five episodes, the battle round began on March 23. The team size was ten contestants per team. The show is enjoyed so much that it has reached its 18th season now. In season one, as well as season two, the team size was ten members. The audience on a global level enjoys this show. Every season of this show has received much-deserved fame and love.

The winner of season 8, named Todd Tilghman, is a father of eight children. He returned to Meridian, Mississipi, after the show. In the front, he decided to join the team of Blake Shelton. He had excelled in all the rounds in the show, be it blind auditions, battle rounds, knockout rounds, and more. He was appreciated by the judges and made his name in the history of ‘The Voice.’