A 22nd cargo supply mission is set by SpaceX at 1.29p p.m. on 3rd June for resupplying cargo materials to the astronauts in the space station.

The cargo supply will include materials required for scientific researches and demonstration of technological things.

A new set of solar panels will be sent to install outside the space station in June. Not only this but some 1000 Water bears and 128 bobtail squids that can glow in dark are also included in this cargo supply for research purposes.

Researchers want to identify whether the symbiotic relationship between the microorganisms and squid is affected by the absence of gravity.

Every day similar kinds of researches are carried out in space to study life in zero gravity. The observations made by the scientists in space are sent back to scientists on Earth for a better understanding.

Tardigrades can survive in extreme conditions and stress and hence can be a very good specimen to do scientific research.

They have been shown to reproduce during the flight to space and were able to withstand the vacuum out e space.

So this space study will help to understand whether the toughest organism of Earth will be able to survive the harsh conditions of space.

These are small 3mm organisms that are mainly selected for this study for two reasons;

– Their ability to produce light using organisms in a symbiotic relationship.

– They have a similar type of immune system as that of humans.

So this study will reveal how the microorganisms change their microbiome in space and how their relationship with other organisms or animals is established. 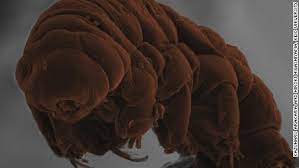